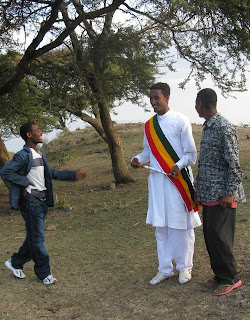 Ethiopia has it's own ancient calender and time. It's desperately confusing to figure out the time and date is. For example, someone might say, "We'll start at 1 o'clock and end at 8 o'clock." But the 1 o'clock is Ethiopian time so really it means 7 am and the 8 o'clock is just regular 8 am.

Basically, what I'm trying to say is that it's as confusing as pants.

Ethiopia also has it's own ancient branch of Christianity. It was the day before Easter 2000 when I reached Dejen. For the fifty days leading up to Easter, Ethiopian Christians don't eat meat. I also didn't eat meat because it wasn't available. One butcher used the down time to repaint his shop.

Then on Easter everyone has a feast. Cattlemen from three hundred kilometres away drive their herds to Addis Ababa. I have never seen such happy butchers as in Dejen that day.

For myself, I hung out with a guy called Henok just shooting the breeze. At one point I was just joking and I said he should join me. But instead of laughing, he said it was a great idea. "So uh... What about your job you were telling me about?" Turns out that I had misunderstood, he didn't have a job currently. "But you were going to school though. You can't leave that." No no. School was out for two months.

In the end, I decided it would be pretty cool to have company so I agreed to buy Henok a bike and let him come with me. It was sort of risky thing, because he could have robbed me blind but he seemed like a nice enough bloke and I felt I could trust him.
Posted by Dan Carpenter at 1:28 AM

ad their own calendar, but the rest is news to me. Sounds confusing! :)

Thanks for the update!

Dan, glad to hear you are still hanging in there. Thanks for the updates. I especially love the one about your Dad and the razors.

I think Langston and his family are headed to Uganda as I type. Guess he just missed you.

Not Uganda, Zambia. My bad.