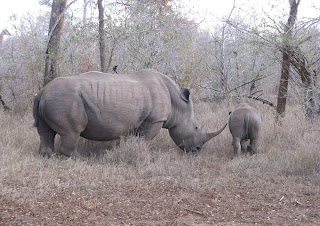 I am in Botswana now. In Botswana there are only three affordable places to sleep in the whole country so mostly it's going to be camping in the forest. I still have tons of old blog posts from Ethiopia and every other country that I wanted to write... Here is a random post from Kenya. The picture is also random, taken from a game drive in Swaziland.

Nanyuki is one of the starting points for Mount Kenya expeditions. I had passed through the town in 2004 with a friend from Sudan, Lagu, when we climbed the mountain together. That time we didn't sleep in town so I didn't know where the hotels were.

I cycled for a while looking for one, but eventually just went with a street hawker who said he take me to a hotel that was pretty cheap. It turned out he was really a mountain guide looking for clients. He remembered Lagu. The first Sudanese man to climb Mount Kenya. He had been guiding two German women that time. We had met the women at the top and hiked down together.

The hotel where he led me, was next to the Montana Guide Company which Lagu and I had used. I saw our old guide in the hotel restaurant when I went to supper. We talked for a bit. He seemed despondent. Guiding is supposed to be a career. These guys are trained in safety and mountain lore. Normally it takes people four days to climb the mountain, but the guides can run to the top in eight hours if they need to. Business was down 90% because of all the post election killings. I offered to buy him supper or a drink, but his wife had already cooked dinner and it was almost night. It's dangerous to walk through town after dark.

After he left, a woman came over to my table. "I've already ordered," I told her, thinking she was a waitress.

I realised then that I had seen her outside talking to some guides. It was cool weather and she was wearing sensible clothes. Jeans. A light sweater. Tallish. Attractive. "Ah," I say, "No. I'm OK thanks."

Suspicious, she asks me, "You're OK? So if I come here later on, I'm going to see you with a woman?"

Man, this story makes me sad in an odd way. I feel bad for the guides, but there's something else... maybe it's just the hardness of life or something.