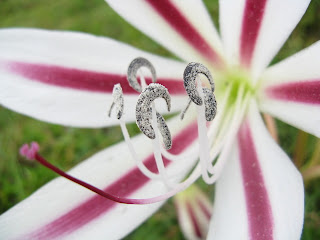 I guess the reason I stopped writing these stories is that all my pictures from Rwanda, Tanzania and most of Malawi were destroyed by a hardware failure. I'll try write up some entries sans photos though. Maybe I'll just post pictures of flowers that I took along the way.

A couple weeks ago, the rest of my pictures were almost lost as well. Thieves broke into my hotel room while I was at supper. They took pretty much everything except my clothes and my backup harddrive. They stole my camera, laptop, phone, ATM card, passport, and money. But those things are easy to replace. I already have a new passport.

I am in Naivasha, Kenya now. Most days I hang out at a barber shop nearby. I like chatting with people there.

The barber shop also charges cell phone batteries for people without electricity in their homes. The other day a lady came by with a new LED flash light still in the box. She asked how much it would cost to charge it (25 cents). She started to take it out of the box, but then decided to take it home first. She wanted to pray over the flashlight and to ask God to bless it.

After she left, the barber told me she was going to use the flashlight to raise broiler chickens. Broilers need a light on at night to keep them awake. Those things have to eat day and night. They eat a lot. People often underestimate how expensive it is to feed them and are forced to sell them at a loss before they're fully grown.

Life is full of everything. We all pray for God's blessing on us.
Posted by Dan Carpenter at 8:26 AM

Oh man... I am so sorry to hear about your photos. That really sucks!

Keep the stories coming, though--its always entertaining and love hearing what you've been up to.