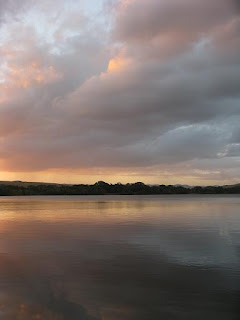 Remember when I said I was going to go to Durbin instead of the more traditional Cape Town? I'm in Durbin now. It took ten thousand kilometers worth of cycling to get here.

From here the plan is to cycle north to Botswana and Zambia.

It's winter down here. Apparently desperately cold when you go further inland. A couple weeks ago one of the roads was blocked with snow. Then later another road was blocked because the wind blew a couple trucks over. I was cycling in that wind one day. It was pretty intense. And obviously the stronger the wind the more likely it is to be blowing in the opposite direction from where you are going...

Mostly in South Africa I have been camping in caravan parks next to the beaches. School is out for the next two weeks so a lot of them are charging double the normal rate. Before that it was just Afrikaner pensioners. I'm not sure where I will stay when I go inland.
Posted by Dan Carpenter at 4:37 AM

Punk kids always ruin it for everybody. Get off my lawn!! (Shakes fist.)

Yeah. I was trying to explain to the receptionists that when I was a kid we weren't allowed to have holidays. It's not exactly fair to charge double...

Don't they realize the awesome nature of your Dan-ness. No charge!

Sorry, that was Seraphina earlier