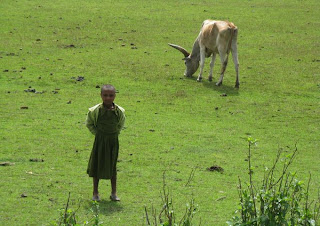 When I was a kid, I went to a boarding school called Sakeji in the very north west tip of Zambia. It was a bit like something from a Charles Dickens novel. Very strict.

One time someone donated the school a ton of canned potatoes. The bad thing was that the potatoes tasted faintly of gasoline. We complained, but the word from above was that we should eat our potatoes or we would be given something real to complain about. For the next two months we had gasoline potatoes for lunch on Tuesdays and Thursdays.

It sounds like I'm whining about food that I ate twenty years ago, but I'm not. It wasn't that big of a deal. I'm only giving that as example to show how at Sakeji we ate what we were given.

Most people liked the breakfasts at Sakeji. It was the same every day and it started out with a kind of milky, cracked corn porridge. One morning, I was about to dig into my porridge when I noticed a rat dropping on the top.

I didn't know what to do. Eventually, I decided to eat the porridge that was far away and figure out later on what to do about the rat dropping. Slowly by slowly, I nibbled away all the uncontroversial bits, until I had formed a small round island of porridge with the rat dropping at the center and I could not eat any further.

By this point, when I looked at my bowl, I realised there wasn't very much porridge left and I could probably throw it away without anyone accusing me of wasting food. We talked very proper English at boarding school. I asked, “Excuse me, Miss, there is a rat dropping here. Please, may I throw away the rest of my porridge?” My concern was that instead of throwing everything out, the teacher would just spoon the dropping off the top.

Fortunately, I had a new teacher recently arrived from Scotland. Apparently, she must have hated rats and rat related poo or something. Perhaps she had a general dislike of porridge poo combinations. Either way, she was eager that I do throw it out, immediately.

What made me think of that incident, was an urban legend here in South Africa about a tourist who was really paranoid about the drinking water. He did everything right and even used bottled water to brush his teeth, but right before he got on the plane to go back to America he caught leptospirosis and died. Leptospirosis is spread by rat urine. The story is that the tourist got the disease by drinking coke directly from the can. He would have been safe if only he had used a straw.

Listen people, just drink your coke. You do not need a straw. You are not going to die today.
Posted by Dan Carpenter at 5:57 AM

good to see you have a new post up and have not in fact died up till today. jason said you had not sent a text in a week so some of us who are prone to worried. which is stupid since i could just as easily die here and you would be none the wiser. all i can say is be sure to wash off your coke bottle with bottled water. sakeji was funny that way wasn't it. weevily beans and vegetable oil that tasted of soap and all. not mention when the porridge got a little over ripe. it is sad to think sakejiites no longer eat corn porridge.
leon

Hee hee, institutional food stories! Ew. I had a friend who grew up in the projects of Chicago's South Side and ended up going to Stanford, my alma mater. At one point he turned to me during lunch at our dining hall and said, in despair, "At this point I'm just eating to survive. I have to eat, therefore, I do." I told him to just be happy that we were scholarship kids, so our parents weren't paying for it.

Dan, you ought to be a writer. This is almost all really good stuff.

Thanks John. I passed a town the other day called Dannhauser and it occured to me that if you named your first born after me but spelled the name wrong he could have a town with the same name as him. Cool huh?

"Perhaps she had a general dislike of porridge poo combinations." I am going to have to add this to my list of notable quotes. Or maybe start a list, anyway...

When I was in college I happened to attend an event with a man from our food service company. We were having a nice chat until he learned where I went to school. Then he yelled "It's not my fault! It's not my fault!" and ran off.

Suffice it to say that our food was notoriously awful.