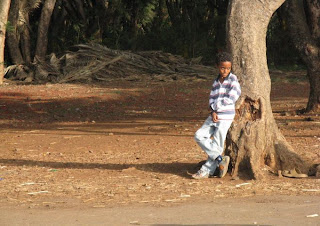 I've changed the name and picture in this story for privacy.

Henok and I met Lebna the evening we arrived in Bahir Dar. We were drinking coffee by the lake and he came with his friends to talk to us. He was in grade six. He spoke English well. He was getting special tutoring from an American organization that helps orphans. He wanted to be a doctor when he grew up. You could see he was exceptionally bright.

We weren't expecting him, but the next morning Lebna was waiting at the door of our hotel. Apparently he went to school in the afternoons and anyway he says, "Today is Saturday." So we took him with us to breakfast. We stayed in Bahir Dar for quite a few days and got to know Lebna pretty well.

After breakfast he asks can he have $10 because he wants to buy an Oxford Dictionary.

When you are cycling through Ethiopia, probably one person per kilometer will ask you to give them something. Mostly it's kids, but sometimes it is people with real needs and I wish I could give them something. I never do. I said no to over a thousand people per month while I was there.

But the Oxford Dictionary idea was unique and charming so I said, "How about this? You can earn some money. Henok and I are going to Gondar. We want to store some luggage here and pick it up on our way back. We'll pay you a dollar per day to keep it for us."

The next morning a disappointed Lebna tells us that he can't store our stuff. His mother refused. "She says that our house is not secure enough and if thieves found out we had your luggage they could kill us."

He also admitted that the story about the Oxford Dictionary wasn't true. The truth is that he was really asking for the money for his mom. She has HIV and needs money for treatment. He was afraid to tell us because of the HIV stigma.

I consider myself pretty progressive, but the truth is that if he had told me the truth at the beginning I probably wouldn't have agreed to help him in the first place. I liked the Oxford Dictionary story. It was charming. It was solvable. A one time gift of ten bucks. Done.

Lebna lived in a shanty town. The house was small. There was a sitting room in the front. He and his mom shared the bedroom in the back. They had a television in the bed room. Some evenings Henok, Lebna and I would rent a kid friendly video and sit on his mom's bed and watch it together.

Lebna's mom was a sweet lady. She was frail and thin. She didn't speak English. She was getting some free ARVs at a clinic for her HIV. I got the impression the clinic was some distance away. The clinic had given her some HIV posters and she had them hanging on the walls of the sitting room.

When we left we gave Lebna's mom $20. Henok told her that Lebna wanted to buy an Oxford Dictionary, but she knew their budget and should choose how to spend it.
Posted by Dan Carpenter at 10:47 AM

Wow. I know so many people specially in Africa have HIV its heartbreaking. I really liked this blog of yours specially however sad it may be. God bless you Dan. Take care buddy.

U DID SOMETHING GREAT DAN. MAY GOD BLESS U . HASSAN