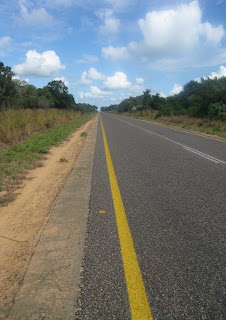 After lunch, I was getting on my bike and two snakes fell out of the tree near me. They were thin green snakes. One was three foot and the other was four foot long.

The fall stunned them for a couple seconds but they seemed unharmed. Your guess is as good as mine what they were doing together that made them take a tumble. They slithered away for a bit and stopped.

The small one turned and looked at me. Its head was perfectly motionless but its pale underbelly waved madly from side to side as if in a strong wind. We stared at each other for a long time until I turned and got on my bike. When I looked around again they were moving in the other direction.
Posted by Dan Carpenter at 3:42 AM

When I was growing up in Kansas City, the amusement park had a roller coaster called the "Zambezi Zinger." It was so lame that the line was always short. In fact, you could ride again and again without standing in line. That made it one of my favorite parts of the park, despite how lame the ride was...

You know that snake was thinking: "Mmm, white meat...."

Sorry, that was me (Seraphina)

According to some scientists, snakes would bite you if you did not see them. In other words snakes follow the shadow of a person.If a snake sees you, it will not bite you but gets scared and runs away. That is it with snakes in the Tropical Africa.
Olivier