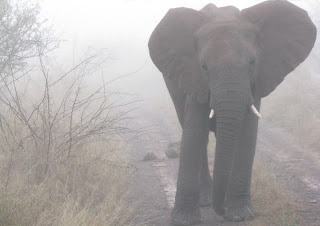 Gar. Haven't blogged for a while. This picture is from a game drive in Swaziland.

I kind of want to fast forward through blogging about Kenya. I went to high school in Kenya. Kenya is a beautiful country with fantastic wildlife. Kenyan's are highly educated and prosperous people in East Africa. I was looking forward to cycling in Kenya, but when I got there it made me depressed.

The post election violence had happened while I was in Egypt. It was over by the time I arrived, but there were still camps of displaced people and I passed through some burned down towns. Over a thousand people died in the violence. In the end, no one was punished for any of it. When I got there, there were politicians on television calling for all the prisoners to be released because they had just been caught up in the moment or were falsely accused. The chief of police was interviewed and he said they had already released everyone except the murderers and rapists, if anyone was falsely accused they would have a fair court case. As I understand it, a judge eventually released everyone and accused the police of doing shoddy investigations. The international court wants to get involved now because genocide cannot go unpunished.

Kenya is a lawless place now. I visited my high school. There is a big fence around it these days. When I was there, I used to go for runs in the forest. The guard said I was unsafe to go there now. A group of students had been robbed by local charcoal makers who had machetes. The guard said that if I really wanted to go outside it was safest to take a machete.

The roads were dangerous too. Kenyan drivers are the most selfish and reckless I have seen. One person was killed when I was riding to Eldoret. It was at those dukas after you cross the equator for the last time. I was out of town, winding my way up the hill and I heard the crash. I stopped and looked down the hill. I could see the people down streaming towards the accident. There women screaming. A minivan had hit a pedestrian. The van had stopped and a passenger had gotten out. In the old days, bystanders would have lynched the driver and set his minivan on fire. I didn't want to see it so I left.

I love Kenya, but it has become a violent lawless place.
Posted by Dan Carpenter at 9:02 AM

Ugh. I am sorry to hear Kenya is in such sad shape. It has to be really hard to see your home sink to this state.