Everybody must get stoned (North Kenya Day 6) 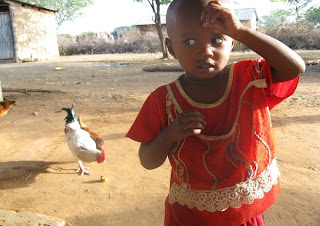 So I stop to greet these guys. There are three of them around twenty years old. They're wearing western clothing, except that they are all carrying Samburu gear--a small club, a Samburu sword (basically a double edged machete in a scabard), and a staff for herding cows. One of them has warrior paint on his head.

People always want me to stop and chat and normally I don't, but this was a sandy road with a big hump in the middle so I couldn't go around them. One of the reasons I don't stop, is that people often ask me for stuff. Sure enough after I finish shaking everyone's hands, they do start asking me to give them my water bottles.

I explain to them that I still have 40 km left until the next village and I need the water, so OK people it's been fun talking to you but I have to go.

The young man with the warrior paint is blocking my way. "Fuckin," he says and pushes my bike back. "Come on," I say, "I've got a long ways to go." He points to my handle bar bag. "Fuckin," he says indicating that I should open it.

I turn to the guy beside me. "Come on. You speak English. Tell him to let me through." His eyes go wide. He waves his hands and shakes his head. Leave me out of this.

The guy behind me is very tall. He doesn't say anything, just waves his club in a threatening way. It has a big iron nut attached to the end.

War paint dude can't figure out how to open my handle bar bag. "Fuckin" he says to me but I shrug my shoulders and tell him that he needs to speak in English because I don't understand what he's saying.

He gives up on the handle bar bag and moves to the side of me. I stop him as he tries to reach his hand into my pocket. The tall fellow waves his club at me.

War paint dude finds a packet of toilette paper in my pocket. I am amused by this. I knew all along that I only had tissues in there.

They stand for a moment discussing. He gives me back my tissues.

So the thing is, they say that there are Somali bandits north of Marsabit. If I had been robbed by Somalis with AKs then I would have just given them everything. It's a scenario that I had prepared for and worked out in my head.

But I hadn't expected to get robbed like this. These weren't even proper bandits, they were just people walking on the road who happened to meet me and outnumber me.

Anyway, when he gave me back the tissue I made a break for it. War paint dude tried to grab my handle bars but he slipped and fell.

I cycled like mad until, "Whap!" One of them threw a staff and it hit me across the back. I almost laughed because it didn't hurt and I could hear how annoyed they were.

That would have been the end of it, if it hadn't been such sandy road. The sand kept on getting deeper and deeper and I was going slower and slower until they had caught up with me. All the time they were throwing rocks at me.

Eventually the sand was too deep and I had to stop, pick up my bike and move it to the other side of the road under a barrage of flying rocks. Some of those rocks were big too, thrown with both hands.

I escaped. My shirt was completely shredded. I couldn't inhale too deeply for the next couple weeks because of a cracked rib. Also I got a chipped bone at the base of my thumb. I did a lot of stretching, but I expect it will always be a little stiff.
Posted by Dan Carpenter at 8:32 AM

Shit Dan. You gonna cycle for another 20 years or so. What the heck! When is this over. You gotta be careful man. There are other ways to die you know, Lets climb hehe ;) Me and you.

I'm actually done cycling. These are old stories that I never got around to posting.

I'm in Tanzania now, waiting for a boat. I itch all over because of bed bugs.

What is it with the Carpenter men and cracked ribs? Kenton cracked his (possibly around the same time) by slamming into a wall during raquetball, a much more mundane method of injuring yourself.
I'm glad you made it through. I love the Dan logic, "well, if they have AKs, then yes, but a nail studded club? Insufficient! You're not proper bandits!" Where are you going to now?

Seraphina: Going back to Mum and Dad's place.

In the end, I'll probably end up moving to Uganda after all. The internet is better in Uganda. The whole infrastructure is better really.