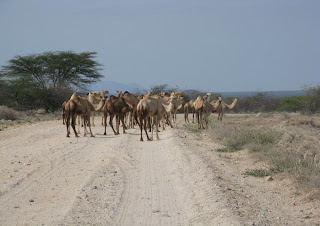 Marsabit is a dusty, frontier town in the middle of the desert. I was due for a day of rest and laundry, but there wasn't anything interesting happening and I decided to push on.

Once you pass Marsabit, there are still some sandy stretches of road, but you start to see people and villages again.

The local tribes have retained their traditions. Women wear elaborate bead arrangements instead of shirts for example. Some twenty kilometers south of Marsabit, I passed through a village where everyone was especially dressed up with war paint and spears. At first I thought that it must be a festival or something, but later on I learned that it was tribal warfare. There had been some killing before I arrived.

I passed an angry man with an AK-47 slung across his shoulders. He didn't speak English, but I knew he was yelling at me to stop. I looked back to make sure he wasn't pointing the AK at me, and I sped up.
Posted by Dan Carpenter at 6:15 AM

Yeah... I don't think I would have stopped either. Sounds like a good way to get stuck in a situation you can't escape.

Well, the thing is that I stopped to take a photo of a guy with a spear. He asked me for a drink of water, so I gave him a bottle of water (not my cycling water bottle). But it turned out that he just wanted to have the bottle.

So I didn't take his picture or get my water bottle back.

When I saw the dude with the gun I figured it was the same kind of situation except he wasn't as friendly.