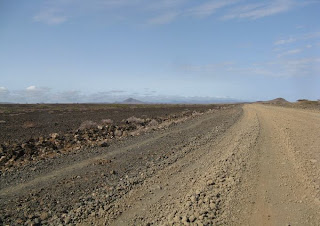 You know in July how the weather man from Channel 9 fries an egg on the sidewalk? Your brain is made of essentially the same stuff as egg. The only thing keeping you alive in the summer time is perspiration.

In the movies people sometimes get lost in the desert and go for days without water and they see mirages. Ha ha ha. There are exceptions, but in real life, it's far more common for people to die of heat stroke on the first day. If you don't move you could survive for two days but normally people try walking to safety and die within hours.

That's why it's so important to drink lots of fluids. When I was in the desert, I used to drink ten liters of water per day. I normally would keep a water bottle wedged next to my handle bar bag so I didn't have to reach down all the time. And I was always super careful to carry enough water and an extra four liters of reserve water.

There is very little traffic on that road but even before I got on my bike, a truck came by. I was going to ask the driver for water but instead I asked him how far it was to the next village. This is a 100% true account of our conversation:

This was surprising and happy news to me, because I had thought it was 20 km to the next village. I thanked him heartily.

Every word I know is insufficient to describe the rest of that day. It was 32 km to the next village. I know that doesn't sound like a long way, but it was. That road was indescribably bad. And so was the headwind. I've had windy days in Egypt and I rode against the wind in South Africa which blew over trucks and blocked the mountain passes, but I have never seen anything like the wind in northern Kenya. At the end, I was too exhausted to ride and could only push my bike. It was 1:30 in the afternoon when I finally arrived.

Really it was a stupid thing. If I had just waited, there are cars that pass by. I sort of lost track of time actually and didn't realize it was afternoon. Plus there were places with trees and I thought maybe someone lived there. I kept on expecting the village to be around the corner.

As soon as I arrived, I ordered two of those one liter bottles of water and a coke.
Posted by Dan Carpenter at 3:13 AM

Wow, that sounds a little scary! I think I would have freaked out after the first few curves revealed.... nothing.

At first you're not too bad off because it takes a while to heat up. I did 10 km and I was like, "Crap? Where is the village?"

But then it was just 10 km more to where the village should have been so that wasn't too bad.

When you are at the 20 km mark you're getting pretty thirsty but you're still optimistic because you _know_ that this is where the village is.

You can see for a long way in the desert. Maybe 4 km--I don't know. I saw some trees and it looked like fields but when I got there it was just reeds or something growing out of a dried river bed.

I did think about digging down in the dried river bed for water. Survivor Man would have done that. But I decided that I was unlikely to find water that way.

Anyway after I passed the dried river I did get worried. At this point I was just pushing my bike.

When I got to the village, I was like, "No. I'm not going come stumbling like some pathetic loser." so I got on and rode the last little bit.

The place is really dry especially in the dry season of the onth of November to March.
For one who is travelling, the weather is convenient in the rainy season in the month of April, May and late October.
This is from www.scottdunn.com/.../scruni-Samburu-Safari...