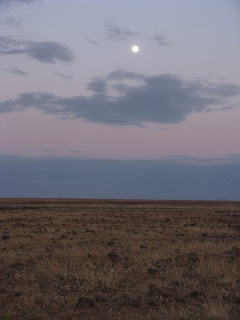 Soleil means "sun" in French, but it was also the name of a French cyclist I met in the desert.

He was deeply tanned with a grizzly beard, a grungy sleeveless undershirt and brown trousers which had a broken zipper.

We exchanged pleasantries. We cursed at the road. He asked if it improved later on and I assured him that it was terrible for the next 50 km.

Then he tried to bum cash off me so he could buy a visa into Ethiopia. It turned out that he had had to spend $6 to repair the ball bearings on his bottom bracket and was now utterly penniless.

He had had a business in South Africa but it had run into problems so he decided to buy a used Rockhopper for $100 and cycle back to France. He was sleeping out in the open at night. I don't know what he was eating.

I worried that he didn't seem to have enough water for the desert. He wasn't carrying a lot of gear. On the front of his bike he had some rock climbing shoes and a coil of rope and on the back he had a guitar.

It is the duty of cyclists who meet in the desert to help each other so I gave him $20. I have since heard that you can't buy visas at that border post, you have to do that in Nairobi. Maybe you can talk your way through. I hope he made it home.
Posted by Dan Carpenter at 4:26 AM

That might be a hard time for you when you found such a unstable community.Marsabit is an area with various ethinic groups and some of them being, the Rendille, Borana and Gabra(Source:www.americanchronicle,com/articles/37345)

Most of the cultural groups in East Africa which live in such dry areas are mostly pastorists.
Culturewise, they practice what we call cattle rustling(taking other peoples cows through fighting) this in most cases takes peoples lives. So it might have been the reason or even civil wars which leads to loss of lives(Source:www.Informaworld.com/.../content