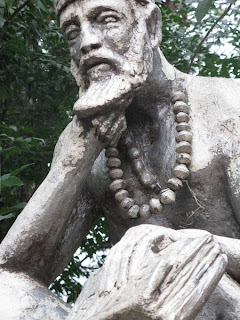 Adis Ababa is the saddest city I have seen. Every Ethiopian beggar imagines that life is better in Addis Ababa.

The city does wrong things to your heart. After a while, I'd see a beggar, missing both legs and an arm, drag himself inch by inch across the street and I'd think, "Come on, buddy. We all know you have a wheel chair hiding in the alley."

Plus Addis smells like someone peed on it. I know that it's just thousands of people taking little pees everywhere, but sometimes it amuses me to imagine a giant Ethiopian Paul Bunyan waking up in the night.

I had the worst diarrhea of my life in Addis. It was a gas diarrhea combo. The first night my stomach bloated up so badly with gas that I puked. For three days, I just lay incapacitated on my bed burping and farting as fast as I could.

Gondar is a mountain town with an ancient castle in the middle. The locals are wealthy and take enormous pride in their heritage.

Restaurant #1: This place had live music and traditional dancing. Henok almost got into a fight with one of the performers who hit another female performer. It turned out they were married. I didn't see it.

Restaurant #2: The owner had been inspired by a visit to France and had created a funky club themed restaurant. The cooks got into an argument with the waiter about killing a chicken. "We're women! It's a man's job!" "No way. I'm not killing it. It's against Jesus!"

Restaurant #3: The musicians ask your name and sing a song about you in Amharic. "This is Dan. He seems nice. Sort of quiet."

Bahir Dar was my favorite Ethiopian city. On the banks of Lake Tana. Drenched in rain and mosquitoes. Muddy and bohemian.

Henok and I stayed in a poorer part of town. The ladies there sell tea for 5 cents a cup from their living rooms. As you sipped your tea, you could admire their doilies and pictures of their family. At other homes you could buy local beer for 3 cents. And some of the women probably sold their bodies. Life is hard and everyone has to eat.

Bahir Dar is a cycling town. The weekend I was there, one of the main streets was shut down for bicycle races. Men, women, children, everyone on bicycles.
Posted by Dan Carpenter at 2:18 AM

The situation in Ethiopia may be due to many reasons as the major ones being poor leadership of whoever leads the city, political instability, corruption among others.
One can not be healthy in such an environment as the air breathed in may be toxic to your body(it consists of germs)