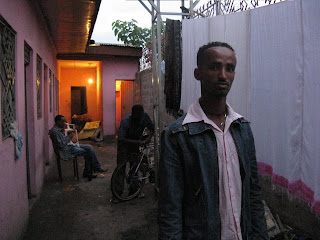 The photo is a hotel from Ethiopia but this story is from Rwanda.

The front of the hotel had a small restaurant, but there was no one around. I dragged my bicycle through to the open area in the back and called out for the receptionist. After a minute a woman arrived and I asked her how much it was for the night. She looked confused.

I studied French in high school. You know how French has those gender things, right? Perhaps I had gotten one of them wrong. Nothing offends French speakers more than grammatical errors. Or perhaps it was her French that was bad. The genocide made people flee to countries that don't speak French. The country is officially transitioning to English. The kids who graduate from high school after 2020 are supposed to known English.

Regardless, I try again slowly and distinctly, "How. Much. Is. It. Per. Night?" This time she tells me to wait here while she goes to get the person in charge. When the next lady arrives, I'm still in my slow and distinct mode of communication. "How. Much. Are. Your. Rooms?"

It is sad to hear that a country torn apart has such a crises.From knowing French to learning English.It seems to be an uphill task for such a country and the people to revive itself.Hope you have a safe journey