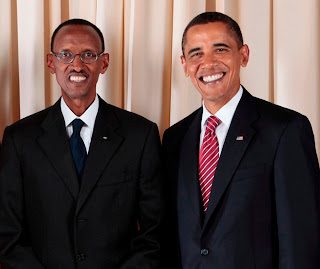 Rwanda is a small country and I don't have many stories from the place. But I feel like I should write something. So I've just cut and pasted a bunch of stuff from Wikipedia. Even today's picture is from Wikipedia.

The story of Rwanda has to start with the Hutus and Tutsis and the genocide.

Back in the ancient times, if you had ten cows then you were a Tutsi otherwise you were a Hutu. If you were a Hutu but you somehow collected ten cows, then you became a Tutsi. There were lots of poor people and fewer wealthy. Sometimes wealthy people married poor people although mostly they married from their own circle. The king was obviously a Tutsi and the country was run by the wealthy.

When the colonists--the Germans and Belgians--arrived, they thought the Tutsis had longer noses and paler skin. In other words, the wealthy people were sort of white-ish. There was an Atlantis type myth at the time about a tribe of white people living in the heart of Africa. The early colonists thought maybe the Tutsis were descended from that white tribe.

The problem is you couldn't tell Hutus and Tutsis apart just by looking at them. In fact, if you take away their cows, it's almost impossible to tell the difference. They don't have any language or cultural differences, for example. These days scientists are doing DNA research to settle once and for all the debate whether there even is a difference, perhaps at the microscopic level. It might be that scientists discover it's something similar to England where some people are more Norman and some are more Anglo Saxon. But for now lets just say they're exactly the same.

Initially the colonials tried to tell the Hutus and Tutsis apart my measuring their noses but that failed. So eventually they just just gave everyone an ID card which said what race they were. In the new system it didn't matter how many cows you had, you kept your Tutsi or Hutu status. If you had a Tutsi ID card, that meant you could go to school or hold a position in the government. The colonials kept the same basic framework with a Tutsi king and Tutsi aristocracy and Hutus being conscripted for unpaid labour and so on.

I'm sure at first the Tutsis thought it was pretty cool to learn they were descended from a mysterious group of Atlanteans, but probably you've realized by now that this story is not going to end well. Historically it sucks to be an ethnic minority.

Up to World War II the Tutsis had all the money and power and the support of the Belgian colonists but after the war, things became progressively worse and worse for the Tutsis. Their king implemented reforms and programs of land and wealth redistribution. At independence, their king was replaced by a Hutu president. The president implemented a program of jobs redistribution. Under the new system having a Tutsi ID card mean your kids were kicked out of school to make room for for Hutu kids. Lots of Tutsis fled the country. Some fought back. Then the president was replaced by a military dictator who used the government controlled media to spew racist, anti-Tutsi propaganda and vowed to stamp out the Tutsi rebellions.

The whole situation festered for decades with Tutsi exiles funding small rebellions and worsening persecution for the Tutsis who remained. Then in the early 1990s it came to a head.

The population in Uganda was tired of playing host to the Tutsi exiles and they were jealous of the Tutsi wealth. But the exiles had played an influential part in the Ugandan Bush War and the president of Uganda owed them a favour. Plus it would be good to have an ally in charge of the neighbouring country. So one night all the Rwandan soldiers in the Ugandan army mysteriously ran off into the forest and went home to fight for freedom.

France, on the other hand, armed and supported the Hutus. Rwanda was a French speaking country and the Tutsis had been gone so long they now spoke English. The question was raised, could you even consider them Rwandan if they had forgotten the language? Non.

The war intensified until eventually the Hutu dictator was forced to sign a cease fire and form a power sharing government. Then almost a year later his plane was shot with a missile and he died. No one knows who did it. The Tutsis say it was Hutu extremists and the Hutus together with France say it was the Tutsis.

The next day the voice on the radio said it was Tutsis who did this. Kill them all. About 10% of Rwanda is Tutsi. In the next three months the Hutus butchered between 10% and 20% of the Rwandan population. If you had a Tutsi ID card you died. If you were friends with a Tutsi then you died. If your nose was too long, then you died.

The corpses floated down the rivers into Lake Victoria where the Nile perch grew especially fat that year.

With the start of the genocide, the Tutsi rebel army went again to war. Led by Paul Kagame they captured the capital and the country and finally chased the Hutu army into Congo. They ended the genocide.

These days Rwanda is peaceful. The remnants of the Hutu army is still out there in eastern Congo but they're not powerful enough any more to pose a serious threat to the government.

Paul Kagame is the president now. He's a thin man with glasses and ears that stick out. He's always on twitter arguing with journalists. It's easy to forget that he was the general of a rebel army, but people say he's a bit of a tyrant. He doesn't like when the refugees from the Congo have protests. Some opposition politicians have ended up in jail for being racist. He's apparently not a big fan of press freedom.

But everyone acknowledges that he is a genius as well. He has curbed government corruption. He has implemented various reforms to help the poor. He has built infrastructure. He has cut government red tape and made it easier to run a business. When it comes time for elections, he has to fake some votes for his opposition because foreign investors who haven't lived their whole life in a warzone don't believe you can get over 90% of the vote without cheating.

I very much enjoyed my time in the Rwanda. It's a beautiful place. And clean. You aren't allowed to bring plastic bags into the country. They're very strict about litter. The people are likewise exceptionally beautiful. The food is good. The roads are good. The drivers are law abiding and considerate. It's hilly and rainy and green.
Posted by Dan Carpenter at 6:54 AM

I am a history teacher in Vermont. I teach a lot of African refugees, (oddly, given we're in Vermront.) We're doing a unit on the Rwandan genocide - your blog is great! Thanks.