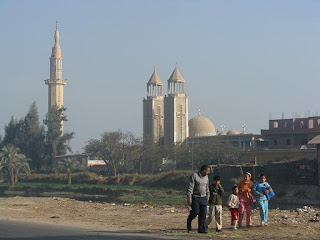 All through Egypt people kept telling me that Muslims and Christians were friends. When I saw this church and this mosque next to each other it seemed really to illustrate the concept of religions living side by side. Actually it turns out that back in the day there was an official policy of building a mosque next to every church.

When I arrived in Mallawi there were a couple of pentacostal missionairies staying at my hotel. Basically they were going where the Spirit led them. At first they thought maybe that was to the country of Malawi but then they realised it was to the city of Mallawi so here they were. Counting Egypt they were visiting seven countries for a month each. One of the countries was Afganistan which impressed me as very brave.

They almost certainly came to Egypt with tourist visas because evangelism is strongly discouraged here. At several of the police road blocks they asked me if I were a missionary. I'd respond that I was a tourist. Then maybe they'd ask me if I didn't love Jesus and I say of course but seriously I'm a tourist only...

I spent the rest of the day in Mallawi with Mohamed's family. He is a student at Assuit University but today he was helping his father and cousins at their hardware store. His father was reading the Koran when I arrived. It takes him 11 days to read through the entire Koran and then he starts over and reads it again.
Posted by Dan Carpenter at 1:51 PM