I ended up staying 2 nights in Minya. I really loved this town. There were fountains all over. My hotel was cheap and the toilettes were clean. The horse drawn carriages, instead of catering to tourists, were used by ladies with small children. I guess they thought that taxi cabs were a noisy, inellegant way to travel and enjoyed being out in the open air. 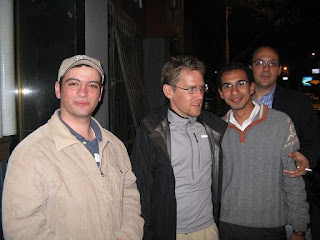 All through Egypt I talked to people who wanted to go to America, but in Al Minya I met some Egyptians who had done it.

Michael had a degree in mechanical engineering, he went to America on a tourist visa but got work at a deli in New York. Now he was back in Minya to get married.

Kero Sami was going to go to Montana to work in a national park for the summer as part of an exchange program with his university. His mother was concerned that he would get eaten by bears but he was worried about the lack of night life.

George's wife won the green card lottery. He worked at a Walmart in Ohio but his background was in civil engineering and he planned to get a job doing CAD stuff. He was back in Egpyt on vacation.
Posted by Dan Carpenter at 8:06 AM

Dan, you look so handsome and manly! Where's our sweet and gentle Daniken? Oh Marshmellow, what happened?

hey dan
it me kero sami
i very happy to write here
hope to see you again
sorry for being away last days but i have alot of exams.
dont forget that Egyptian friend is more helpful than any other friend
yours