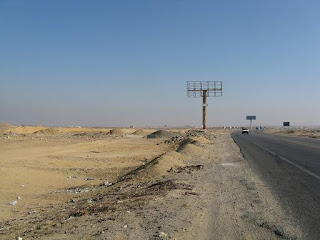 The eastern road from Beni Suef to Al Minya runs through the desert. My only company was the trucks from the quarries where they dig the white rocks used for bricks. I cycled for 80 km through heat.
I did end up getting stopped by the police. They said there was no hotel in Magahga where I had considered staying. It's quite possible that they were right. Magahga a town of between 50 and 100 thousand people. I would have been happy with any kind of place to sleep not just a tourist hotel... To be honest I wouldn't have minded camping in the desert. Instead I had to go on to Al Minya.

Some people say you may be able to bribe the police but in my experience that isn't the case. The only police who bother to stop you are people who genuinely want to do their job and who have the clout to organize a series of police cars to give you a ride. The police man who stopped me was a serious Christian man with 2 bars on his shoulder. 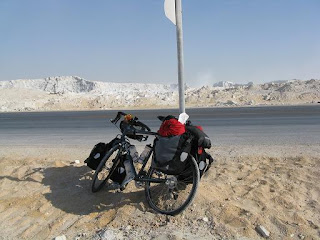 At the next town the police were more relaxed. We had a great time drinking tea, eating foul and generally joking around. At the last stop, there wasn't any police cars there to drive me and they let me cycle the remaining 20 km to Minya on my own so long as I promised to phone them when I was safely checked into a hotel.

Posted by Dan Carpenter at 9:37 PM

good luck carpy. I was watching a movie called 'Blood Diamond' and it looked pretty dangerous over there. im sure its nothing like that though. good luck buddy.