Theft & The Trip to Abu Simbel 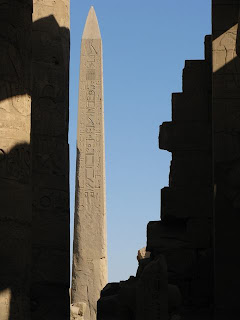 There is very little theft in Egypt...

One time a friend of mine stole a book and gave it to me. I have three theories why he may have done it. Maybe because it was a government shop and he didn't like the government. Maybe it was because he used to work there and didn't like the place. Maybe it was because he was stoned on drugs at the time. All that was true. I couldn't decide what to do, so I read the book and found it surprisingly enjoyable.

When it came to people stealing my stuff I took a much less lenient view.

It was 4 am. I had been at the bus station since 2:45 waiting for the micro bus to Abu Simbel. There was only one other person there. He wanted to borrow my cell phone but there was no money on my SIM card so I swapped in his SIM and changed the language to Arabic for him.

He was talking on the phone and walking around. I started getting uncomfortable with how far away he was, so I got up and walked closer, still giving him his privacy but keeping an eye on him. We walked all the way to the end of the bus station and back like this.

I was a little annoyed at this point.

He went over to the water fountain and started drinking. Then very calmly he jumped the fence.

What happened next is a blur.

I don't remember running to the fence or jumping over but I remember being surprised how far it was to the ground on the other side.

It was dark. I was in a muddy field. I could just make out his gray robe running away. I was yelling "La la la! (Arabic for 'no no no') Thief!" I fell. I scrambled up. I fell again. I spotted him running in a different direction. There were dogs barking on every side. He fell. I didn't see him get up. He was still on the ground when I almost stepped on him.

I told him to give me the phone and he held it out. I checked that it was mine. I considered returning his SIM card and decided against because it was dark and dangerous and he deserved to lose his $2 SIM. I leaned over him and yelled, "Stupid." He yelled "Stupid" at me. I stormed back to bus station.

As I walked back I thought about how I used to like playing hide and seek at night as a kid. Then I was ashamed for thinking that.

Later, when it was light, I looked at the field and there was no way he could have outrun me. It was surrounded by a high wall on three sides and a deep irrigation ditch on the other.
Posted by Dan Carpenter at 11:19 PM