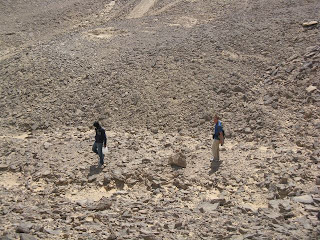 One highlight of my time in Aswan was the weekend I spent with Mohamed Said and Sheik Abdine at Sheik Abdine's farm in Agabah.

We had to sneak out of Aswan at night and pay the bus driver extra. Egyptians need a permit from the police for a tourist to stay at their house. The police don't trust anyone with the Sheik in front of their name because that means they are a very strict Sunni Muslim so we wouldn't have got the permit. Ironically, in my experience, people called Sheik have been the people I can trust the most. Abdine assured me that he would try not to behead me.

Sheik Abdine's family had a huge house. They purchased their farm for $10,000 back in the day but it was worth a lot of money now. Someday someone is going to want to build a hotel on it. It was beautiful to drink tea by the Nile at night and watch the cruise ships drift by, their lights twinkling and their bowels filled with sleeping tourists.

On our way back Mohamed, spotted an ancient granite block. It clearly had part of man carved on it. The thing is that some of the sides had been broken recently my theory is that it got dropped while someone was moving it.

When they built the Aswan dam a European company moved eleven temples out from where the lake would be. As a reward the president let them move one temple all the way to Europe to keep. Maybe one of those guys dropped part of a block by mistake. That's my theory.

Egyptians dream about finding ancient artifacts and becoming fabulously rich. Lots of people in Luxor have actually found things. I know someone in Luxor who found an ancient scarab. He thinks it is worth eight thousand dollars on the black market.
Posted by Dan Carpenter at 12:15 AM