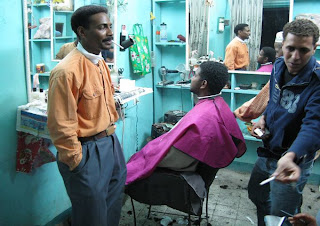 I spent a month and a half in Aswan waiting for the Sudan visa that never came through.

I was at such a wonderful 1920's hotel. I had corner room on the top floor with a balcony on both sides. The shared bathroom was one of the cleanest I had in Egypt. And at $2.75 per day, it was my cheapest Egyptian hotel.

I generally started moving around at 1 pm. I hung out with Mohamed and Sheik Hassan who had stalls next to the hotel. We used to have a deal, Mohamed bought falafel for me at Egyptian prices and I watched the stall for him when he went to the mosque for prayers.

Assad and Mohamed Said got off work from the fertilizer factory at 7 pm. Assad had a second job as a barber. I spent most of my evenings at his barber shop making tea and chatting to people waiting to get their hair cut.

Sometimes I wandered over playstation place next door or to Mohamed's restaurant on the other side. The kofta there was fantastic. Also the salad. Normally I'm not very enthusiastic about salad but his was really exceptional.

Some days I hung out with Mustafa the Journalist at the "round club" next to the Nile. The waiter's name was also Mustafa and the same for the man at the door. That made remembering easier. We'd drink tea and watch the sailboats. They were building the first McDonalds in Aswan downstairs. Then maybe we'd go back to Mustafa's house to eat supper.

Other days I tagged along with Wael the micro bus driver and chauffeur. I had dinner with his bosses a couple times.

I spent a lot of time in an area called Sel. It was where you had to switch micro-buses when you went to Assad's house.

I drank tea at Sheik Sabre's tea shop there. Wahed shai kamsina. One tea, half size. Sheik Sabre wouldn't accept any money from me. I drank so much tea in Aswan that at one point I got a scrape on my arm but instead of blood only tea came out.

Ahmed the Nubian worked at shop next door selling ring tones and MP3's for mobile phones. He hooked me up with a library of Nubian music on my flash drive.

I sat around talking with Abu Abdulah and his apprentice plumbers. He gave me an antique Egyptian coin from his collection. It's from 1938 and it's the only Egyptian souvenir I plan to keep.

When I was feeling wealthy I ate chef Memnon's macarona. I generally paid the tourist price even though I was the only tourist ever in history to eat there. Two other tourists walked by once but didn't stop. Salaa's father owned restaurant. I lost game after game of dominoes to Salaa and bought him cokes. If I was broke they let me pay Egyptian price for macarona and tea was free.

But my favorite times were at Assad's just shooting the breeze with Walid, Bushie, Mahmud, Sheik Goma, Karim, Amir or whoever happened to wander through.

Normally Assad closed shop around one in the morning. It was a problem to get a bus that late so Assad would give me a ride on his motorcycle. I'd wear a hat so that the police wouldn't see that I was a tourist and pull us over.
Posted by Dan Carpenter at 5:15 AM