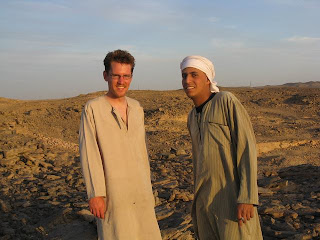 Some Americans claim to be from Canada when they travel to avoid anti-American sentiment. There is no need in Egypt. Everyone hates Bush but they also dream of going to America and generally like Americans.

In the bazaar, every single vendor asks you where you from and then proceeds to tell you about their cousin in America. There are only half a million Egyptians living in the US so you know that at least some of the vendors have to be lying. I started to tell people I was from other countries to add variety. No claimed to love South Africa, for example.

Egyptians don't like Denmark. People are very angry about the comic thing. One of my friends started freaking out because he thought he was eating Danish cheese but it turned out to be Egyptian cheese. Claiming you're from Denmark could easily get you killed. Fortunately, I only did that once.

Another time a man asked me if I was Jewish. It was a mix of English and Arabic and I thought he asked me about Jesus so I said sure. Fortunately, Assad overheard the conversation and rescued me, otherwise the man was going to call the cops. It's a bad idea to claim to be Jewish.
Posted by Dan Carpenter at 2:30 AM

Weird. I would have assumed Americans would be unpopular because we have been propping up Hosni Mubarak. Oh well, I'm glad to hear it.

Mubarak is a war hero and he probably won the last election based on that. People who fought in the October war are not going to vote against him.

Of course, Mubarak did put his opponents in jail after the election. He's not 100% popular.

America basically props him up by giving him money. In Egypt he tells people that it's because of his special relationship that America gives them all these piles of cash.

One person told me that it seems like a very expensive relationship. He could probably have a relationship with Claudia Schiffer for half the price.