Luxor stories: George gets kicked out of a hotel 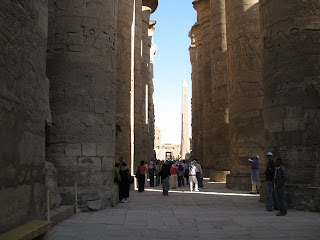 One game I like to play is spot the tourist. It's trickier than you'd think. Take George for example, he is Egyptian but he lives in America, wears a baseball cap and he carries a camera. Tourist.

So one day George was supposed to be waiting for me in the lobby of my hotel. He starts blathering to dude at the front desk about America etc. The front desk person is busy and tells George to grab a coffee from the roof of the hotel.

When he gets to the roof, George starts chattering away to the barista. The barista asks George where he's from and George tells him he's from Al-Minya (a big city north of Luxor). The guy thought George said Almanya (Arabic for Germany) and George thinks that's amusing so he says, "Yes. I'm a German tourist. Ho ho ho."

The thing is that all these discussions are in Egyptian Arabic because George doesn't want to pay the tourist prices. Both the receptionist and the coffee dude should have known that he was Egpytian.

Well, it turns out only tourists are allowed in the hotel.

I find George on the roof. We're drinking coffee and the part owner of the hotel comes tearing in. This guy is pissed. It's the kind of anger where flecks of spit start showing up at the corners of his mouth. George was trying to explain that he lived in America but didn't get very far because the guy is cursing and swearing. As a result, I now know how to say "America my vagina" and "America on my penis" in Arabic. At this point, I decide to check out immediately. Then the guy says we can't leave and that he's calling the cops.

When we reached lobby the other part owner of the hotel got involved. He was a nice fellow. He tried to calm things down and make things right but it was a bit late. My advice is to avoid the Luxor Nubian Oasis hotel. Grand hotel is cheaper and the service is good.
Posted by Dan Carpenter at 2:32 AM

Dan, met one of your "kindred spirits" bicycling across Kansas last week. Told him about your blog. Love the stories. Keep us up to date.

Your Mom and Dad were in my neighborhood a couple weeks ago, but I was gone. Sorry to have missed them.

Wow, those sound like useful phrases! You'll have to teach me... :)