The person who influenced Luxor the most is a lady named Hatshepsut. This is her temple. 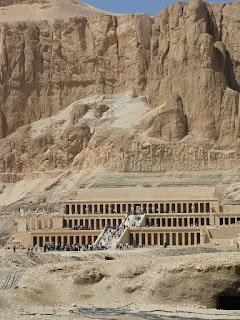 Her father was Pharaoh and her mother was the Great Royal Wife. When her father died, it wasn't clear who should be pharaoh her or her half brother. So she married him and they ruled together as pharaoh and queen. But really she did most of the ruling.

Then her husband died, his son by a lesser wife (Hatshepsut's half nephew I guess) was supposed to take over. Instead Hatshepsut said he was too young, so she ruled until her death twenty some years later. Egyptians were fat and happy under her rule.

After her half nephew finally became pharaoh he went around destroying her statues and chipping carvings of her off the temple walls. 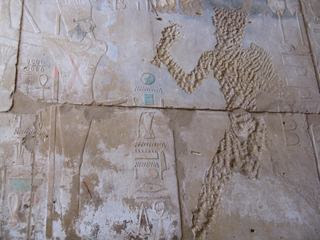 Posted by Dan Carpenter at 2:10 AM

You left out the best part! She said she was a man and therefore able to be pharaoh!

Dan, I am so jealous of some of your photos! That's a great one with the Temple of Luxor across the river in the background.