Cycling from Luxor to Edfu 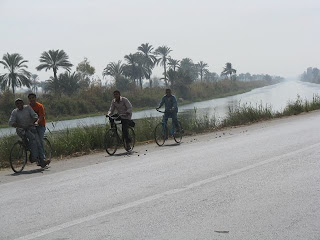 The trip to Edfu was a surprise gift. I had planned to take the tourist convoy instead of cycling. I couldn't find it and I was going to ask the police at the first road block. They were drinking tea so I changed my mind and sneaked past. The other road bocks made me promise I was only going to Esne but didn't stop me. When I reached Esne it seemed like such a fine day that it would be a pity not to take down the back road to Edfu. So I did.

A pack of five or six dogs came at me on the way to Esne. They were running next to me and I couldn't out distance them. Fortunately, I managed to force the lead dog into oncoming traffic to escape. Unfortunately I don't think it got run over. You can be a dog person or you can be a cyclist but you can't be both.

For a few years now I cycled in many places, but one of the best places to rent a bicycle is in Luxor.

An amazing experience to cycle and see all the ancient sites and temples.

It is a bit hard to find good quality bikes however I found a bike rental shop in Sheraton street who has good quality bicycles for a couple of euro's a day. Also I received a very detail streetmap. They also have an website: http://www.bikerentalluxor.com and the staff overthere is fantastic and enthousiastic, and like, next to cycling also billiard...