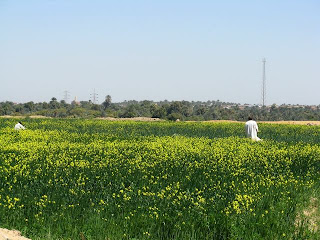 I took the desert route from Edfu to Aswan to avoid the police.

The weather that far south was much hotter. It's a bit dangerous to exercise in the heat. All along the way there is mummified road kill which doesn't improve the mood either. I would have liked to wait out the midday heat but had to make it to Aswan before nightfall. Go slow and drink lots of water.

Before the Aswan dam was built, the Nile had a fertile flood plain. With the dam in place, the Nile doesn't flood anymore. These days not a single green thing grows except for what people irrigate. There is a sharp line between lush gardens and desert. On parts of the road it was green to the left and desert on the right. On other parts it was desert as far as the eye could see.

After a day in the desert, the view of the bridge to Aswan is like some kind of kitschy painting of heaven. It's a beautiful white suspension bridge. There is a swampy area where random horses, cows and donkeys graze and fishermen pole their canoes around.

It takes an hour to cycle from the bridge to Aswan so it was almost dusk when I arrived.

I knew there was a train station downtown but I followed the wrong train tracks and ended up in a suburb. That's where I met Assad and Mohamed Said who led me to a hotel. As I was unpacking Assad proclaimed, "Ah, you've got a sleeping bag. Why don't you just stay at my flat? You can just crash on my couch, no problems."

Welcome to Aswan.
Posted by Dan Carpenter at 1:51 AM

Sounds amazing! Thanks for sharing the beautiful description.