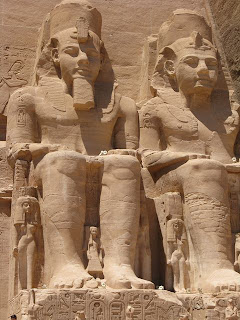 Ahmed, Nabil and I adopted a kitten for one afternoon at our hotel. I chipped in 40 cents and we bought some lunch meat. As I watch Ahmed feeding it, I was almost overcome with jealousy. I just wanted to grab the lunch meat and cram it into my mouth.

Obviously 40 cents is nothing but it seemed like every single blasted meal was a battle and I got sick of dealing with it.

There was one old man who sold pastry and charged everyone the same price so I used to go there often. The only day he was on vacation, I had to argue with his replacement. He quoted me one price but then he couldn't find correct change so he only gave me part of my money back. I asked him for the rest but he says I must have misheard him originally. At first I though I must look stupid or something. Obviously we both knew the correct price so give me the change alright? In the end it took him less than 30 seconds to walk his butt over to the other cash register and fish out my change. I shouldn't have to fight about it every single time. Gar...

Haggling is a part of Egyptian culture, but everyone knows the price of food. They wouldn't try pulling stunts like that with an Egyptian. It's stupid and tiresome.
Posted by Dan Carpenter at 2:21 AM