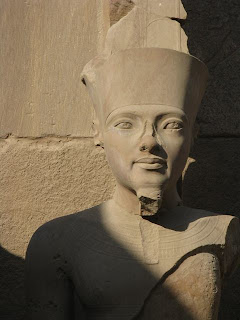 The electricity was off at our internet cafe so we ended up talking to Hans, age forty something, from Texas.

Hans was an anthropologist studying how brush strokes in the ancient Luxor tombs showed what moods the painters were in. That seemed like an unlikely occupation. To be honest, quite a few of Hans's stories seemed unlikely, but we needed a source of entertainment and the electricity was off.

I was particularly amused by Hans's story where he got into a fight with a waiter who used a black olive instead of a green olive in his martini. Ah, the trials of living in Egypt.

There were two less fun stories that stood out. One is that the Luxor carriage drivers go too fast and the horses fall on the cobbles and skin their knees. The other is that Luxor is a top world wide destination for pedophiles who prey on young boys.

Afterwards Mena, George and I tried to find horses with skinned knees and eventually decided that Hans was full of crap.

Unfortunately, I think he was right about the pedophiles.

Some time later, I was hanging out at my friend's shop, joking around with a group of kids. They pointed at their buddy and said, "You want fucky-fucky?" It's an awkward situation and I did my best to gloss over it. Then the kid started rubbing my leg with his foot and I had to tell him, "Knock it off kid before I smack you upside the head." It's laughs all round, except the kid wasn't joking.

Afterwards my friend tells me, "I don't understand why Americans have sex with boys this age." I tried to tell him that pedophiles aren't accepted in America. He says, "No, not you obviously. Stop getting offended." I try to tell him that no, pedophiles are really not accepted in America. He says, "Oh, but it's everywhere in Luxor."

The problem is that Egypt won't do anything that could lead to bad press or hurt tourism. Pedophiles are quietly handed over to their embassies and flown home. It's hard to prosecute them in their home country. All the evidence, victims and witnesses are in Egypt. They're pretty much always released.
Posted by Dan Carpenter at 3:02 AM

Man, that sucks. This is exactly why the US needs better sex tourism laws.

For that matter, we need to do a better job fighting sex trafficking at home. A lot of women are brought over (either legally or illegally) and essentially held in slavery in brothels. We do a really bad job fighting this.

Yeah. The thing is that if it was girls being abused they would just behead the guilty parties. No questions asked.

But since it's little boys everyone figures that they can fend for themselves.